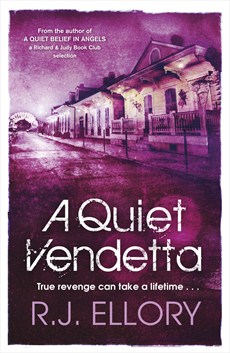 When Catherine Ducane disappears in the heart of New Orleans, the local cops react rapidly – she is the daughter of the Governor of Louisiana after all.

But the case gets very strange, very quickly. Her bodyguard turns up horribly mutilated in the trunk of a beautiful vintage car and when her kidnapper calls he doesn’t want money: he wants time alone with a minor functionary from a Washington-based organised crime task force.

Quickly dragged down to the deep South, Ray Hartmann puzzles over why he has been summoned and why the mysterious kidnapper, an elderly Cuban named Ernesto Perez, wants to tell him his life story. It’s only when he realises that Ernesto has been a brutal hitman for the Mob since the 1950s that things start to come together. But by the time the pieces fall into place, it’s already too late…

A QUIET VENDETTA is both the epic novel of one man’s life in the Italian Mafia – a story that ranges from Cuba to Las Vegas and from L.A. to Chicago – and equally a powerful thriller of rage, love and loss. It confirms Roger Jon Ellory’s place at the forefront of new thriller writing.

Ellory’s entrancing tale weaves two storylines together, keeping you turning the pages until a surprising denouement that I guarantee you will not see coming. This is one of the best Mafia reads since Mario Puzo’s “Godfather”, and Cuban hitman Ernesto Perez one of the most compelling characters in crime fiction. The Birmingham Post

This is a sprawling masterpiece covering 50 years of the American Dream gone sour. Real people and events are mixed in with fictional characters in this striking novel that brings to mind the best of James Ellroy.   The Good Book Guide Beautifully written, this is a novel to get lost in and one that is a long ride into the darkness, and if you recall reading Mario Puzo’s The Godfather as a teenager (as I did), then this is a powerful book that will make you relive that memory – masterful, but beware of the brutality, because it comes out of the most literate prose I have read in many years.   Deadly Pleasures What emerges is an epic history of the Italian Mafia in America which, as in the very best of thrillers, has the ring of truth and real research behind it all. With exquisite pace and perfect timing, Roger Jon Ellory has given us a piercing assessment of the nature of love, loyalty and obsessive revenge, not to mention a deep understanding of la cosa nostra. The Guardian

As with his debut, Candlemoth, Ellory takes us on a breathtaking journey, mixing real life twentieth-century US history, events and characters with a compelling personal fictional story. He has the ability to make us feel compassion for even the most brutal characters and there are some shocking acts of violence in the narrative. There is a ticking clock pace to the narrative with regard to both Hartmann’s family obligation and the need to reach and rescue Catherine Ducane. Beautifully written with a knockout twist in the tale and an assured and completely believable depiction of Mafia life.   Tangled Web

The kidnapping of 19-year-old Catherine Ducane, daughter of Louisiana governor Charles Ducane, and the brutal murder of her driver set the stage for this absorbing crime novel from Ellory (A Simple Act of Violence) covering more than 50 years of mob violence and American history. When the FBI agrees to Ernesto Perez’s request to bring Ray Hartmann of the New York district attorney’s office to New Orleans, Perez turns himself in. Perez promises to reveal Catherine’s whereabouts, but first he must tell his life story as a Mafia hit man to Hartmann. Perez recounts a journey that includes his involvement in at least nineteen murders and the mob’s links to such figures as the Kennedys, Richard Nixon, and Marilyn Monroe. Perez’s goal remains a mystery, as does his selection of Hartmann as his audience, up to the end of this brilliantly conceived tale of greed, politics, family loyalties, and vengeance.   Publishers’ Weekly USA In New Orleans, someone kidnaps nineteen year old Catherine Ducane; the teen’s bodyguard is brutally murdered. The NOPD reacts quickly as the victim is the teenage daughter of the state’s Governor Charles Ducane. The kidnapper Ernesto Perez fails to ask for money or governor-level request. Instead he notifies the FBI he wants to meet with Ray Hartmann, a minor bureaucrat in the New York district attorney’s office. In exchange for this meeting, he will inform the Feds where Ducane is hidden. Perez informs Hartmann that he has been a mob hit-man for decades; he has been involved in at least 19 hits and recounts ties to Kennedy and Nixon. The FBI, the governor and the media wonder what Perez’s secret agenda is and why he is picking to chat with a nonentity like Hartmann. This is a great thriller that uses five decades of Mafia history in the Bronx, Manhattan, Vegas, Cuba and elsewhere as the background to a fascinating tale. Readers will be hooked from the moment Perez makes his demand known and will keep on reading until they learn what his agenda is and why. Perez and Hartmann are fully developed superb antagonists as this time the truth will set both of them free. A Quiet Vendetta is a superb and enthralling story.   Harriet Klausner, The Mystery Gazette Pre-Katrina New Orleans, with all its passion and decadence intact, provides an ideal backdrop for the intimate revelations of Ernesto Perez, a career hit-man. (This book was originally released in the UK in August 2005, literally days before Hurricane Katrina devastated the city.) In what may well be the best Mafia novel since The Godfather, Ellory explores the dark intimacies of people bound by a complex relationship with violence, ranging from the mean streets to the highest strata of society. The story is built around a dialogue between Perez and Special Investigator Ray Hartmann, with Hartmann attempting to get Perez to reveal the location of a kidnapping victim. And not just any kidnapping victim, but the daughter of the Louisiana governor. The mutilated corpse of the girl’s bodyguard casts an ominous pall over the case, and the political pressure on alcoholic Hartmann and a small army of FBI agents is intense. This is the fourth of Ellory’s powerful, literate thrillers to be published in the U.S.(following A Simple Act of Violence, 2009). It’s one damn fine book and should be highly recommended to all but the coziest of crime-fiction fans. Elliott Swanson, Booklist – Starred Review

RJ Ellory has been an acclaimed author for some time in his native England, and is lesser known here in the states even though he always uses U. S. settings. Starting with the stunning A Quiet Belief In Angels and the shadow history-serial killer hybrid A Simple Act Of Violence, his work has started to come over here. The latest Ellory book to hit our shores, A Quiet Vendetta, solidifies him as one of the top crime writers today.

A Quiet Vendetta is quintessantial Ellory, particularly with it’s use of a story-within-a-story. It begins with the kidnapping of the Louisanna governor’s daughter. The kidnapper requests a sit down with Ray Hartman, a troubled alcoholic Special Investigator for a federal mob prosecutor. When Ray returns to his New Orleans hometown of hard memories, Mr. Perez walks into the police station. He tells Hartman he will reveal the location of the girl after he tells his life story. And what a tale it is. Perez was born in New Orleans to a violent Cuban father who moves the family back to his homeland right before Castro’s revolution. A chance, brutal occurence brings him into the fold of the Mafia, returning him to the states as one of thier coldest and most efficent enforcers. It’s a sweeping hard boiled saga of violence, friendships, love, and betrayal that sheds light on the Kennedys, Watergate, Jimmy Hoffa and other murky histories. What Ray finds himself stuggling to find out is how the governor, Perez, and he are connected. The answer is only completely revealed at the very end. It’s the balance of mood, character, and plotting that make this a unique book indicitive of Ellory’s work. At its core it looks at two adversaries who are both looking at their last chance to put their darker nature to rest. Ellory’s ability to take us through their dark world and offer hope for individual humanity makes him a stand out author. Mystery People USA