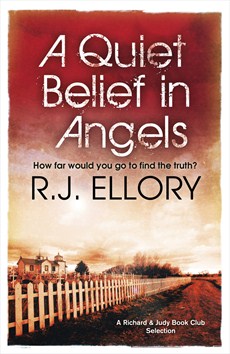 Joseph Vaughan's life has been dogged by tragedy. Growing up in the 1950s, he was at the centre of series of killings of young girls in his small rural community.

The girls were taken, assaulted and left horribly mutilated. Barely a teenager himself, Joseph becomes determined to try to protect his community and classmates from the predations of the killer.

But despite banding together with his friends as 'Guardians', he was powerless to prevent more murders – and no one was ever caught. Only after a full ten years did the nightmare end when the one of his neighbours is found hanging from a rope – with articles from the dead girls around him.

Thankfully though, the killings finally ceased. Ill-fortune was not yet done with Joseph though and in desperation he leaves the town of his birth to forge a new life in New York. But the past won't leave him alone – for it seems that the real murderer still lives and is killing again.

And the secret of his identity lies in Joseph's own history?

Roger Jon Ellory has a way of concealing the shocks in his text so that you stumble upon them, almost as if by accident, with some of the horror that you might feel if you too discovered the dismembered body of an eight-year-old girl. Each jolt strikes painfully, like a sharp stroke from a cane – and the reader will seek, utterly riveted, this masochistic beating right to the end of the book. It is set in rural Georgia during World War Two where 12-year-old Joseph Vaughan is growing up beneath dark clouds of tragedy and loss – the loss of his father, his mother’s descent into madness, the war and the terrible spectre of a killer who is beating, raping and dismembering little girls. At first the appearance of a long white feather gives Joseph a quiet belief in angels, but later he recognises that the feathers are harbingers of death, and he is almost lost in the guilt of being unable to protect the victims. Ellory harnessed me and drove me headlong through his extraordinary, elegant and powerfully elegiac prose. This is compelling, un-put-downable thriller writing of the very highest order.

Once again R.J Ellory shows off his special talents. In A Quiet Belief In Angels, Joseph, a writer, tells his own story, from his childhood in the 1930s in a small town in America's South to the day, decades later, when he comes face to face with the man responsible for a series of horrific murders of little girls. The crimes, which take place over a number of years, tear Joseph's community apart and, with the outbreak of the Second World War, rumour and suspicion start to circulate about a formerly well-regarded neighbour whose origins were German. Joseph, who discovered one of the bodies, is particularly affected and his entire life is coloured by his feeling of failure to protect the children. This isn't your standard shock and bore serial killer novel. It's an impassioned story of a man's life told in Ellory's distinctive voice, and it confirms his place in the top flight of crime writing.

A Quiet Belief In Angels is a beautiful and haunting book. This is a tour de force from R J Ellory.

A young boy grows up in the shadow of a serial killer. In a rural Georgia backwater during the 1930s and 40s a man kills and mutilates young girls. Joseph, a child himself, finds one of these victims. He forms a posse with his friends to try and find the perpetrator but without success. The killing spree lasts ten years and covers several counties until a neighbour, close to Joseph’s family and under suspicion, hangs himself. These are events which haunt Joseph and shape the rest of his life. The dead are not the only victims. Joseph escapes to the big city of New York where he forges a new life as a writer then hears word that the killings have started up again. From the opening page we know that Joseph finally finds the murderer but we do not learn his identity until much later on. A Quiet Belief in Angels, Ellory’s fifth novel, must be one of the best suspense reads this year. The assurance with which Ellory writes and the lucid detail and elaboration he brings to his world are a feast for the reader. Ellory works on an epic scale but makes us care deeply for his protagonist. His use of language is dizzying and delightful.

I loved this book. It is almost incidentally a crime novel, although it centres around  the brutal slaying of ten little girls in seven different counties of Georgia between 1939 and 1949 and the effect of these murders on the protagonist, Joseph Vaughan. It is essentially the story of Joseph's life, and it is absolutely wonderful. Every page brings a fresh revelation, an exquisite turn of phrase. Its sublime evocation of mid-century Augusta Falls, Georgia is almost physical: the languid, backwater quiet, the isolation, the sense of sometimes stifling community, the joy of an untrammelled rural childhood, the ache of loss. It's equally striking when the scene moves to NewYork, to the pulsing bars and salons of the Beat Generation. Then a terrible series of events turns Joseph's life upside down. This is as good as the best Southern Gothic literature.

Try this one tiny example: `Vallelly was silent for a while. He lit his pipe, and the crackle of fired tobacco was the only sound in the room. Arabesques of smoke curled towards the ceiling, and the light through the window turned them into ghosts. 'A Quiet Belief in Angels transported the and made me marvel, ache and cry, and I urge you to read it.

The most unusual serial-killer novel you'll ever read. It made me laugh and cry, and kept me up until the early hours of the morning.

Ellory's latest novel is of loss, shattered innocence and redemption. Joseph Calvin Vaughan was 12 when the first girl was taken. By the time he turned 40, there would be many more. Set in the heartland of Georgia in the early 1940s, A Quiet Belief In Angels is a riveting yarn. Ellory takes the reader back in time when life was simple, to a town where everyone knew your name. But even then, against the quiet backdrop of the schoolyard, the church and the neighbouring farms, evil would come and go. From the moment the body of the brutally murdered Alice Van Horne was discovered, the community of Augusta Falls would never be the same. Neither would Vaughan or those he cherished. Haunted by his childhood, his life would be turned on its head, time and time again. Ellory's tale is an ambitious one; a horrific story that will stay with you long after you've read the final paragraph.

When it comes to selecting their next read, lovers of literature are familiar with the adage “don’t judge a book by its cover.” Whether most people actually subscribe to this rule is debatable, but the advice is particularly sage when considering English author R.J. Ellory’s A Quiet Belief in Angels. The bold cover evokes authors like James Patterson, and it would be all too easy to dismiss Ellory’s American debut as a cookie-cutter thriller. To do so would be a shame for both fans and non-fans of the crime thriller genre.

Given the basic premise of the novel, it’s not hard to see why A Quiet Belief in Angels is billed as a literary thriller. Growing up in small-town Georgia, Joseph Vaughan knows only a hard life that is mired in tragedy and horror. The days of his youth are forever tainted by a series of brutal murders targeting young girls, shaking the bedrock of his sleepy town and forcing Joseph to grow up faster than seems fair. As all that he holds dear is slowly stripped away, Joseph decides to leave his hometown and head north to pursue his dream of becoming an author—only to find that the atrocities from his past will not be so easily left behind.

While the mystery behind the mounting body count might motivate many readers to stick with this novel, the story has a rather leisurely pace, which might make “thriller” seem like a misnomer here. The murders never feel as though they are the central conceit of the novel, with the real focus instead being Joseph’s transition from boy to man; A Quiet Belief in Angels reads more as a dark coming-of-age tale rather than a traditional crime novel. But don’t consider this a weakness—Ellory’s writing is so lyrical, powerful and heartrending that those who normally steer clear of the genre are likely to feel at home. A Quiet Belief in Angels has already gained Ellory international acclaim, and while Americans may be a bit late to the party, another saying once more proves true: better late than never.